"All that is gold does not glitter, not all those who wander are lost; the old that is strong does not wither, deep roots are not reached by the frost." 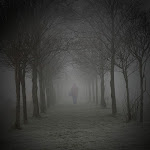 AND I WILL SING A LULLABYE

I wish I could say that before my father died we had a meaningful conversation or THE NOTEBOOK moment, if you will. Perhaps you saw the movie or read the silly book by Nicholas Sparks, so you know it's when the stricken wife comes out of her AD glaze, recognizes her husband, shares a dance, and dies in sync with him that very night. Beautiful. Poetic. And, of course, utter nonsense unless you have ever kept vigil during the last dying day of someone you love. Trust me, you are watching, you are waiting, you are willing that moment.

When we took my mother off life-support, we had six hours left before she died. My brothers were there with their wives, my kids and Charlie were there, and my dad was also partially there. We took turns vying for attention at her bedside, just like when we were kids performing handstands in a pool and coming up for air each time shouting, "Did you see me, did you see me, Mom?" Her throat was pretty damaged from the last attempt of modern medicine to save her life, so mostly we got nods which, come to think of it, we mostly got for our handstands too.

Mom was stoned on morphine - truly in and out of consciousness - and I remember waiting all afternoon for her eyes to focus directly on me, while everyone stood around taking turns holding her hand and smoothing her brow. She loved us, and we knew it, but you really, really want that last affirmation. Finally, thankfully, when I felt her total gaze, I saw my chance to take a breath and plant my hands squarely on the bottom of the pool. I thrust straight legs through the surface of the water and gurgled bubbly I love yous. For as long as I could hold an upside-down stance, I promised my mom I would take care of my dad just like she had. As my lungs gave way and my execution crumbled, I assured her we would be okay and she could go. When I came up for air, I got the nod.

My dad's death was different. He faded away and it took eleven days and everyone left way before it was over. I held his hand and smoothed his brow all by myself. I was protective of him and preferred no one come too close. I was vigilant; he was kept spotless and his sheets were crisp. I was prepared; his carefully folded burial clothes lay waiting on the bureau. I was aware; he was comatose, feversome, mottling, and moaning. It wasn't likely we'd share a dance.

Being there, watching him starve and shrink, was gut-wrenching and mentally exhausting. I had trouble keeping down food and could not sleep. Hospice said there was no timetable, everyone passes on their own schedule, and the priest reminded me how much strength it actually takes to die. My poor father had not sipped water or eaten for a week and a half, and I agonized over my refusal of an IV or feeding tube. Day after day, I told Dad he should go and prayed for Mom to come get him. I sang the same Beatles' song over and over again which he might have hated. I was losing my shit and eyed his morphine longingly.

On the evening of November 23, 2010, my father, Jack Terman Mommsen, Sr. died. I sensed movement in the room's waning light and got up from my chair. He opened his eyes as he struggled to say something, and I pretty much knew what it was. There was silence and I felt loved. I reached for his hand and held my breath. His suffering was ending and our moment had come.
Posted by JULIANNE MOMMSEN GREEN at 12:58 PM